Ruth Maguire MSP has been appointed as the official ‘Species Champion’ for the hedgehog. The ‘Species Champion’ project, which is overseen by Scottish Environment LINK, hopes to gain political support for the protection of Scotland’s threatened wildlife by pairing MSPs with endangered species.

As Species Champions, MSPs learn about their species from expert member organisations of the LINK Wildlife Forum, and about the pressures on their species and its habitat, such as habitat loss or fragmentation, the impact of invasive non-native species, climate change, and pollution.

Ruth is delighted about her new role, and got stuck in straightaway with a visit to Hessilhead Wildlife Rescue Centre, where she met several hedgehogs and learned about the risks facing them from staff at the centre. With bonfire night fast approaching, one of the major risks to the species which Ruth hopes to highlight is their becoming caught in bonfire piles.

As a strong proponent of strengthening the fox-hunting ban, Ruth was also extremely happy to meet Hessilhead’s tame fox, Macdonald, and learn about the ongoing challenges, including fox-hunting,  facing his species too. 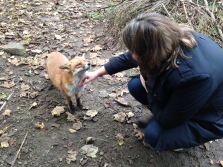