Whilst Westminster falls into a maelstrom over Brexit and the Tory infighting that has been the root cause of the mess reaches its crescendo, in Holyrood the business of governing Scotland continues despite the Brexit bourach.

On Tuesday I led the stage 1 debate as Convener of the Equalities and Human Rights Committee on the Age of Criminal Responsibility Bill. This major legislation aims to raise the age of criminal responsibility in Scotland from 8 to 12, and to ensure that no child below 12 will be treated as a criminal, or gain a criminal record.

Although the law was changed in Scotland in 2010 to stop the trials of children below 12 in adult courts, it is still possible for those aged from 8 to 11 to obtain a criminal record in certain circumstances, if they have admitted an offence. This Bill aims to decriminalise 200 children a year, which is important because evidence has shown that early exposure to the criminal justice system can contribute to the rate of reoffending. It also aims to prevent the most traumatised children from becoming involved in serious harmful behaviour.

I believe that the Bill reflects Scotland’s commitment to international human rights standards, and I look forward to providing further scrutiny as it continues its journey through Parliament.

Thursday was International Day of the Imprisoned Writer and I was privileged to mark the occasion in the Scottish Parliament by leading a debate on the topic and sponsoring an event, which was introduced by the First Minister and featured Scottish Writers reading from the work of those who are jailed by countries who seek to suppress freedom of expression.

The aim of both events was to demonstrate our solidarity with persecuted, exiled and imprisoned writers across the world. It was heartening that all political parties in the Scottish parliament did this and were represented by members supporting the debate and event. We are currently witnessing an international decline in free expression, as documented by organisations such as PEN International, Amnesty International, the Committee to Protect Journalists, Human Rights Watch and Reporters Without Borders, with global efforts by state and non-state actors to attack and silence journalists.

According to Reporters Without Borders “more professional journalists were killed worldwide in connection with their work in the first nine months of 2018 than in all of 2017”.

Many others, such as renowned pro-Kurdish journalist and artist Zehra Doğan, remain imprisoned, simply because she published a painting on social media of the Kurdish town of Nusaybin destroyed by Turkish state security forces, with the Turkish flag flying over the ruins. From inside Diyarbakir prison, she bravely continues to write about female political prisoners and human rights abuses. She is guilty of no crime.

Elected representatives worldwide have a requirement to combat impunity and seek justice for murdered, persecuted, and imprisoned writers, I will continue to do that in whatever way I can.

Finally, just another reminder that this Friday 23 November I will be hosting a Scam Awareness Surgery at Towerlands Community Centre, from 10.30am-12.30pm. Entry is free, with various experts to offer advice. I hope to see you there! 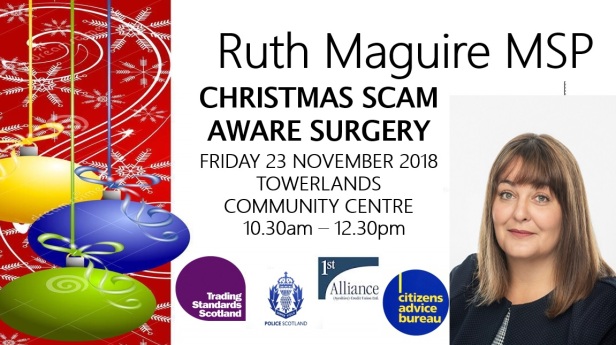